A few things I’ve learned through the near half-decade of reading on great investing minds like Warren Buffett and Charlie Munger but also the ecosystem of commentary on the entrepreneurship business.

These are random thoughts and the mostly unreality but who know they likely are. After all it’s all a fractal.

Doing One Thing Well to the Extreme

I think Munger once said that in shareholder meetings or on one of his more famous lectures that all companies he’s found down well are the ones that has take take something good, works well, resonates with customer and taken it to the extreme. Maybe he’s describing what is in effect a flywheel.

More of something, leads to that something else and make things the first something better and so on and so forth.

Or he means, you know the economics of opening new retail locations so well that you just keep doing it and expand the geography while extending the brand. I think he gave Walmart in the 60s for the one.

Costco was another one he mentioned that seems like a no-brainer that keeping costs low meant you got the best suppliers and made the customer happy (in terms of their wallet size anyway).

Action (and this is for myself only): Find one thing well, and don’t spread yourself too thin or think that you can do more than one thing at once well. Test, do what works and do more of it.

Now speaking a the micro level, I see, hear and we see and hear companies with products and apps fail everyday. Though of Fall of 2019, it hasn’t really been the predominant rhetorical out there with the billionaire dollar valuations and hundred of millions of dollars raised pouring into these startups and other companies.

I love the business of producing mass media including literature and films. I love it because we as humans are built to be told and to create stories. It helps us grow, it’s how we are wired to learn and it ultimately can transcend our thoughts and help us change our minds (for both good and worse I might add).

But there’s also something cool about hearing the products, showrunners, actors and the crew talk about the craft because there are so many parallels of that and building digital products. It takes a village, for one.

Secondly, there are high profile cases of organically being the best thing since slides bread and there are massive flops no matter who you put as the lead actor or director.

Oddly enough that gives me hope that in product building and in the media producing world, there exists what I would consider a relatively easy level-playing field. We all try to build something that is compelling, grabs people’s attention, goes viral or has some network effect so on and so forth.

That means we can all do it.

I watched Ad Astra this weekend and it was a disaster in storytelling and character development but the production value was impressive. Digital products can be like that too with all the slick UI and lacking a way for people to be properly on-boarded or know what to do as a Jobs-to-be-done.

Think about it, products at least in the agile form have user stories. In those stories we call out the cast of characters and be clear about what they want to achieve. What is their arch and how would we measure their success? That’s a character arc in any good film.

We all want our customers to success. Their are missing something (a pain-point, a character flaw) and then have an inciting incident that forever and irrevocably changes the course of their lives. It gives them hope, it gives them a mission to be on to uncover and learn about the world around them and either fix themselves or fix the world or both.

I think we apply that more of the mindset in the product world and in the business world at large.

Good stories as old as time.

Going back to Charlie Munger — he just has too many good nuggets of wisdom, but he mentioned in a very famous lector how him and Warren started out in the textiles business that was Berkshire Hathaway, but by all measures was a business with poor economics and margins.

Sales people came around and told them about the new looming machines that would help them get perhaps faster and cheaper materials to their clients. And as the story goes, Warren said that if these looming machines actually take off, he’ll sell the business.

I’m paraphrasing and poorly at that but that story which resonates with me is an illustration of how important it is to keep in perspective that it’s okay to produce something better and cheaper that that would be passed down the customers, but now of that will come back to the bottom line (for long). Something else would come along and every one of his competition will be getting the same thing driving prices down further. Just look at the prices of these commodities:

Would love to talk more about his post later, but we can se that prices of those things have gone done, not up.

But also know that we want to provide value to our customers too. We find ways to do that, and I would say on most days it is balancing act. Things have changed in this world so that psychology has changed too about what people find of value, what people find of value even when a product is raise in prices. That’s also another topic for another day. More to come.

About Me and ‘Another Think Coming’ Blog 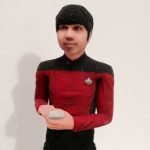 I’m Eugene Ting.  I was an engineer, studied human factors design, worked in it for a bit.  I had a phase of entrepreneurship where I bootstrapped a SaaS app. I then found product management, which is my current career path now.  I’ll generally write about anything, but the main topics that I keep going back to are: financial independence, fintech, investing, startups, writing and entrepreneurship.  Those topics aren’t mutually exclusive either.